NOTE: The tables in this page were broken in the migration to the new CMS platform. I’m looking for a solution to make them easily readable again.

The Carl Zeiss Standard Primes are 35mm format f2.0 lenses developed by Carl Zeiss for ARRI (then Arriflex), and predate the original Zeiss f1.2 High Speed series (Super Speed in the U.S.). Information on when the original set was introduced is hard to come by. A safe guess is after 1964 and before 1975. It is likely that this set was just called something like the “Zeiss Primes for Arriflex”, and once the High Speed lenses were introduced in 1975, they became the “Standard Primes”.

These lenses are comparable in size to the Cooke Speed Panchro but are a more modern design and significantly exceed the optical performance (on the technical merits) of the older Speed Panchros. Focal lengths in the original series are Distagon 16, 24 and Planar 32, 50 and 85mm. An 8mm focal length for 16mm format was also available.

The small size of the lens barrels allowed three of them to be mounted simultaneously on the 3-lens turret of the ARRI 35IIB/C cameras. They also fit inside the prime lens blimp of the Arriflex 35BL I/II.

When introduced, the Zeiss Standard Primes had the original Zeiss single layer anti reflective coating and were marked as T2.2 except for the 16mm which was a T2.4. In the early 1980’s an updated version of the Standard Primes Mk. I was made with the T* multcoating (same as on the Super Speed lenses), and these lenses are marked at T2.1, except for the 16mm marked T2.2.

In the mid 1980’s Zeiss introduced a “Mk. II” version of these lenses with larger housings that included integrated focus gears and accepted ARRI Bayonet or PL mounts. The optics in these Mk. II T2.1 lenses are exactly the same as the optics in the smaller barrel version, only the mechanics differ. The Mk.II series eventually had more focal lengths of new design added: 20, 28, 40, 100 and 135mm all T2.1. In the industry, these lenses were commonly referred to as the Zeiss T2.1 primes.

Note: The Planar 2/135mm is listed in a 1978 ARRI brochure as being part of the “Super High Speed” series, but in a 1983 brochure it is listed as part of the Standard Prime series. There is no right answer to this and the 100 and 135mm Standard Primes are frequently used together with the T1.3 High Speed primes (longest focal length 85mm). There is no problem cutting between them other than the limitation on maximum aperture. 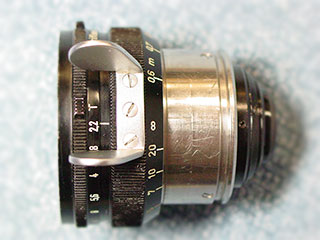 All of the later generation Standard Primes have T* multi-coating

NOTE: There is a 12mm T2.1 lens that was an ARRI product and is not part of the Standard Primes series. It was constructed by using a Distagon 16mm T2.1 with a permanently attatched aspherical front element (aspheron) and carried ARRI branding. Optex also produced a 10.5mm T2.1 lens using the same method.

The optical design of these lenses is considered classic. Wide open, contrast is lower than what a modern prime lens (S4, Ultra Prime) can deliver. There is a “spacing” between the 10, 20 and 40 lp/mm MTF curves that is characteristic of a vintage lens. This means that progressively finer details get rendered with less contrast. This is true of all lenses, but the effect is more pronounced with older optical designs. This type of detail response is considered pleasing by many, especially when these lenses are used in conjunction with a high resolution digital cinema camera.

All Zeiss Standard Prime lenses (both the older and newer designs) exhibit some positive focus shift when stopping down. This is indicative of a “relaxed” correction of spherical aberration, especially on the older designs, which is associated with pleasing bokeh. For this reason it is recommended to stop down to the aperture you are going to shoot at and then adjust the focus for best results.

All lenses in the set exhibit positive field curvature, except for the Distagon 2/28 (which is widely considered the best of the Standard Primes for optical performance).

Testing these lenses on a very accurate T-stop tester, the 16mm (which is marked T2.2) measures T2.2. The 24mm is marked T2.1 but also measured T2.2. However, both lenses are within Carl Zeiss’ tolerance spec for T2.1 marked lenses. The 50 and 85mm are both marked T2.1 and both measured exactly T2.1

Both the 50 and 85mm ST Planars cover Full Frame 24 x 36mm with some corner falloff. This excess coverage is lost when stopping down past T5.6
These lenses use the Zeiss Planar symmetrical design. The Planars are knows for high sharpness, high contrast, very good flatness of field (focus does not fall off in the corners) and very pleasing bokeh due to the simple symmetrical lens design. The 85, 100 and 135mm Standard Primes are superb close-up/portrait lens.

As a general rule, T* coated Standard Primes can be intercut with modern cine lenses, with a good match in perceived image sharpness, as long as the ST’s are stopped down to T4. Many cinematographers feel the bokeh of the Zeiss Standard Primes is more pleasing than that of the Zeiss High Speed primes.

This is less of a disadvantage now since spare parts for the Zeiss High Speed (T1.3) lenses have been discontinued since March 2015.

The main disadvantage of the small barrel Mark I Standard Primes is that the focus scale is very small and was designed to work with the index mark on the ARRI Standard/Bayonet lens mount. When fitted with focus gears and PL adapters, the focus scale is practically impossible to see on an unmodified lens.

Since there is a large span of time between the design of the original Standard Primes set and the focal lengths that were introduced later, the set is not well matched for sharpness or color rendition. This is one reason why there were superseded by the Ultra Primes series.

©2016 Jorge Diaz-Amador, all rights reserved. All text, images and other content are original copyrighted works, unless otherwise indicated.

Jorge Diaz-Amador own exclusive rights to this content under the United States Copyright Act of 1976. Unauthorized use and/or duplication of this material without express and written permission from this website’s author and owner is strictly prohibited.