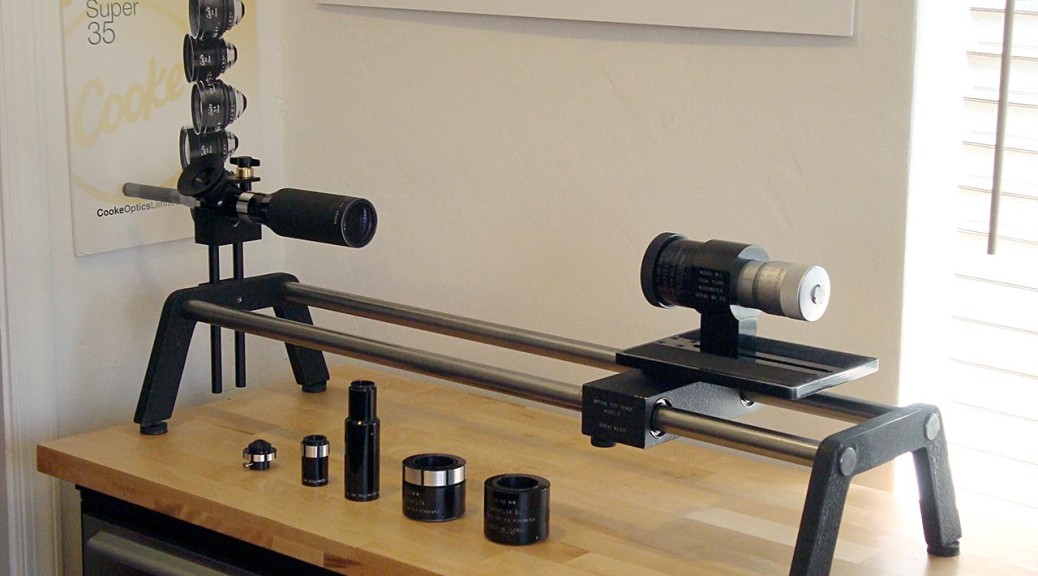 This was the original CinemaTechnic collimator which we used for all our lens and camera service  from 2000 through 2006. The unit pictured above was sold in 2009.

Richter Cine Equipment was an American company, based in upstate New York, that manufactured autocollimators and lens test projectors specifically designed for use in testing photographic and particularly cinematographic optics.

The company was founded around 1960 by Kenneth Richter, who was a cinematographer and a filmmaker specializing in travelogue films, who had a university background in optics and astronomy.

By the 1980’s the Richter Autocollimator system became very widely used in the motion picture camera and lens industry. It was the standard instrument used to calibrate focus of cine lenses in rental houses worldwide. In 1985 Kenneth Richter was awarded an AMPAS Technical Award (Technical Oscar) for his Autocollimator.

Production of the autocollimators and the Lens Test Projector were wound down by the late 1990’s. Richter Aero Equipment ended operations by October 1998. After Kenneth Richter’s passing two years later, the last remaining old stock was sold off.

Today Richter Cine Autocollimators are highly sought after in the second hand market. The represent by far the best value in lens testing equipment. However, the newest Richter Cine products are now over 20 years old.

When purchased used (internet auction sites, for example) the systems are always out of calibration.  After reconditioning and upgrades, their accuracy rivals that of systems at 5 times the cost.

Richter Cine’s best known product is the R2 reflex autocollimator. The system was comprised of an autocollimator block (the reflex unit with reticle, beamsplitter and eyepiece), a collimator objective, and light source. It was possible to see the image reflected by film in the aperture of the camera being tested when a lens and camera were tested together.

The R-2 Autocollimator forms the heart of the Richter Cine collimator system.

The objective lenses used to project the reticle image out to the lens being tested are called Collimator Objectives. In the Richter Cine system they are always fixed focus on infinity. Focal lengths between 60mm and 2000mm were available, but objectives longer than 254mm are rare. The different focal lengths accommodate testing a range of lenses, with longer focal length objectives required to test longer focal length lenses (at least a 2:1 focal length ratio is needed)

The Focal Plane Micrometer (FPM) forms an indispensable part of a modern collimator system for testing photographic and cinematographic lenses. With the FPM you can view the image reflected off a highly polished reference reflector that simulates the image plane. The reference reflector can also be precisely moved toward and away from the lens being tested to check the position of best focus.

This relatively rare S-2 has a housing nearly identical to the M-2 but replaces the micrometer with a microscope. The image is formed on a reticle, representing the image plane, and the microscope allows viewing that image at 50x magnification.  This accessory was intended for checking focus scales.

There were two benches, Model A and Model B. The Test Bench is the support that allows the collimator system to be used, as it is difficult to use a hand-held collimator. The Model A, referred to as a “collimator holder” was a single-rod version only meant for testing small cameras, like SLR still cameras.

The far more common Model B uses dual precision ground steel rods and recirculating ball bearings and allows for different rod lengths to be used. The Model B is the support that allows the collimator system to be used as it allow for the R-2 Collimator Block and Objective  and the M-2 FPM to be kept in alignment. The top of the pivoting test table can also be used to mount cameras for checking ground glass focus (film cameras) or Flange Focal Depth (digital cameras) using a calibrated test lens.

In order to test a lens on the M-2 FPM, you need a lens mount that can me attached to the M-2 (which uses a large diameter fine pitch thread).  Richter Cine called their mounts Standards. Each was made to be the same length as the flange focal distance of the camera mount.

Richter Cine made a large number of mounts, many for camera systems that are now obsolete. Richter did make a PL mount but never made a Canon EF mount.

The original light source for the R-2 was a large lamp house that held an incandescent light bulb surrounded by a spherical reflector. This was powered by a simple power supply with a rheostat to reduce voltage in order to vary the light intensity.

This type of light source suffers from a very warm color temperature, especially when dimmed, and generates a great deal of heat which must be isolated from the R-2 block or it will affect accuracy.

For photographic and cinematographic lens testing, autocollimators are primarily used to check focus. Experienced operators can also judge image quality subjectively. The autocollimator projects the image of a test reticle through the lens being tested and onto a simulated or real image plane. That image is reflected back through the test lens and the autocollimator and diverted to the eyepiece where it can be observed by the operator.

More about how autocollimators work (page in development)

CinemaTechnic has taken up the task of bringing the Richter Cine system into the 21st Century:

Reconditioning and Calibration for Richter Collimator 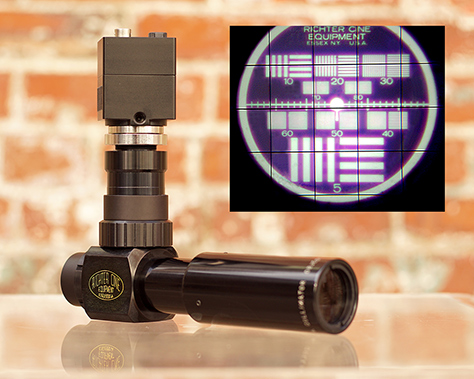 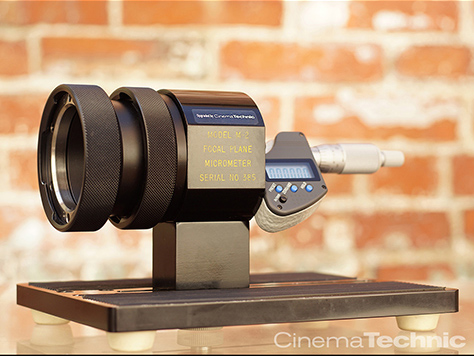 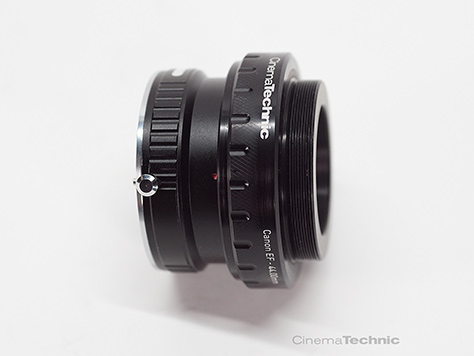 All text and photos ©2016-2020  Jorge Diaz-Amador. All text, images and other content on this site are original copyrighted works. CinemaTechnic and Jorge Diaz-Amador own exclusive rights to this content under the United States Copyright Act of 1976. Unauthorized use and/or duplication of this material without express and written permission from this website’s author and owner is strictly prohibited.

We are now actively monitoring for infringing websites that copy our content.