Click the DVD box to view the movie trailer!

“While it seems low budget, which I’m sure it was,
the film makes a nice attempt.
The majority of the main characters are interesting and multi layered…”

Distributed in US by Velocity Home Entertainment, a division of THINKFilm.
Available where DVD’s are sold. Also available for rental from Netflix.

View the trailer at the HEAVY SOUTHERN NIGHTS website 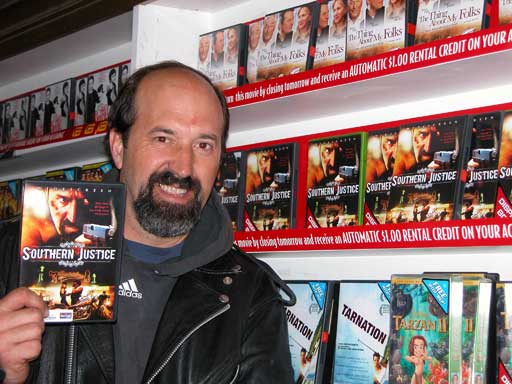 Above: Director M.D. Selig at Hollywood Video in Los Angeles

Director’s Bio and story of the making of SOUTHERN JUSTICE

SOUTHERN JUSTICE features on other websites:

View the trailer at the HEAVY SOUTHERN NIGHTS website

The Look:
16 x 9 Widescreen Edition. The film was shot with super 16mm lenses providing a clear picture but a reality TV-esque vibe, which I thought fit the southern white trash overtone and setting of the film. If it was shot any other way it would have been too contrived and lost its gritty appeal.