***THIS ITEM IS NO LONGER AVAILABLE*** This page is being maintained as a reference.

We do not have any of these Mutars in stock and do not anticipate having any in the future. 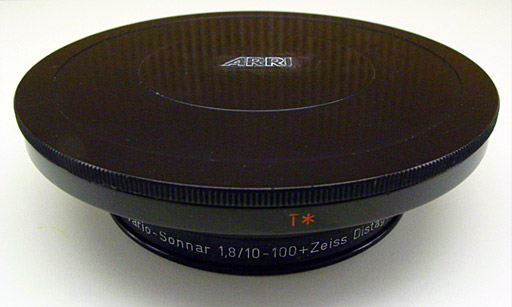 The Carl Zeiss Mutar f=6mm is a wide angle supplementary lens, commonly know in the industry as an “Aspheron” because these lenses use expensive aspherical surfaces to cancel distortion. The Mutar was made in the Carl Zeiss factory in Oberkochen Germany, along with the Super Speed primes and the Vario-Sonnar zooms.

This supplementary lens fits on the front of a compatible lens and greatly increases it wide angle capability. To use it on the 10-100 or 11-110 zooms, you clamp it on the front of your lens, and set your zoom lens into macro mode and then turn the zoom ring until the image is in focus. This will convert your 10-100mm zoom into a 6mm super wide angle prime. The Zeiss 11-110 becomes a 6.6mm prime. Maximum aperture remains the same (no light loss).

NOTE: It is not possible to “zoom through” with the mutar, the lens remains fixed at 6mm focal length.

With the 9.5mm T1.3 Super Speed prime, the Mutar is attached as above and the lens set near minimum focus until the image is sharp. The focal length is now 5.6mm. Maximum aperture is still T1.3

In both cases, focus must be set by eye, and focus marks on the lens will no longer be accurate. The depth of field is immense at 6mm, so focus does not have to be measured.

The Mutar features the Carl Zeiss T* Multi layer coatings on all air-to-glass surfaces. Note the red T* on the front ring of the lens. This coating is one of the most efficient anti-reflection coatings ever developed and is used on all Zeiss lenses today, including the Ultra Primes.

The T* coating improves optimizes color saturation, enhances contrast and reduces flare to a minimum. The neutral color correction of this lens, standard on all Zeiss lenses, guarantees the absolute interchangeability with all other Zeiss T* multicoated lenses (such as the Super Speed T1.3 prime lens series).

The Zeiss Mutar is not the same as the ARRI Aspheron, which was manufactured in Switzerland. The “Bolex” Aspheron will work with the 9.5mm and 12mm Super Speed primes, but not with the 10-100 zoom.

The 9.5mm T1.3 when used with the Mutar becomes a 5.6mm T1.3 prime. There is some slight vignetteing on the corners of the full Super 16 aperture, but the HDTV 16:9 transmitted area just clears. A very slight push-in on telecine will eliminate this problem.

The Mutar will work with the 12mm T1.3, converting it to a 7.2mm prime and covers Super 16, but it was not optimized for this lens and there is some spherical, chromatic and other abberations near the edges of the image. I would not reccomend using the Mutar on the 12mm prime.